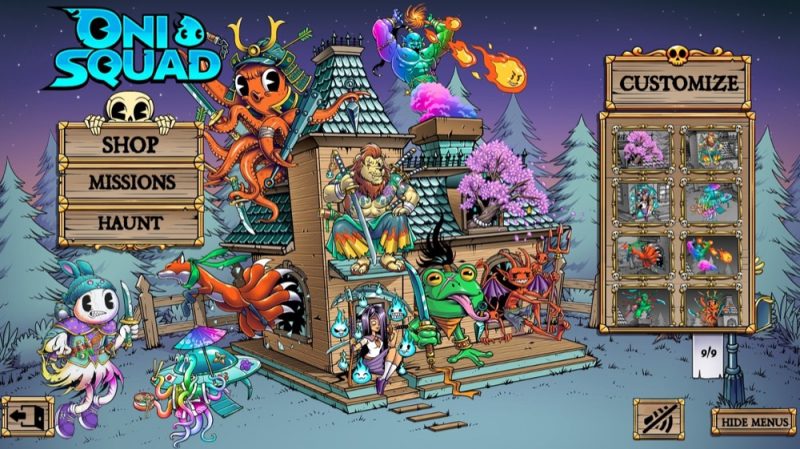 Oni Squad’s NFT collection launched as a free mint in late January, and reached 300 ETH (> $1m USD at the time) in trading volume on its first day. It was among the top traded collections on OpenSea at the time, particularly notable given it cost early adopters $0 to acquire the assets.

The Oni Mansion game, a casual game where players collaborate to customize and build their own NFT mansion, also featured a free NFT mint on Ethereum. Players participated in daily missions to share, visit, and leave messages at each other’s mansions. As they completed missions, they earned tokens to buy new traits to upgrade their mansion. In this way, the overall rarity scheme constantly evolved as players updated their mansions and unlocked new traits.

The game also innovated by enabling several external Ethereum-based NFT collections to play the game as well. Oni Mansion was one of the first games to feature interactive interoperability across NFT projects on multiple different blockchains (Ethereum & Polygon), without requiring assets to be bridged between them.

Yomi Games aims to be the “Zynga of Crypto” by focusing on casual and social gameplay catering to players new to blockchain and crypto gaming. Future games will be mobile-first, widely accessible, and emphasize easy onboarding for players new to crypto.

Pavan Katepalli, Yomi Games CEO, said in a statement that this emphasis on player inclusivity is what differentiates Yomi from its competitors. “We believe player-owned economies, enabled by blockchain technology, are the future of gaming. We want all of our games to be as accessible as possible to the broadest audience and onboard people new to digital collectibles and gaming NFTs. Current crypto games and NFT projects are gated by high purchase barriers to entry, but we believe eventually the most successful games will meld free-to-play and play-and-earn mechanics.”

“What got me excited about Yomi was that they were of the first games that leveraged the inherent composability of NFTs to bring other NFT collections in-game, creating a third place whereby these communities can interact via a collaborative and social gameplay experience. The team also brings the perfect mix of web2 and web3 operating experience to onramp the next millions of players into this new paradigm via games.” – Jerry Lu, Principal at Maveron

About Yomi Games
Yomi Games is a blockchain gaming studio developing social Play-and-Earn video games targeted at casual audiences. Its products include Oni Squad, a set of NFTs representing cute ghosts enabling gameplay in Oni Mansion, as well as future games. The Company plans to publish multiple crypto mobile game titles, across a variety of casual genres, that appeal broadly to mainstream audiences and act as a gateway to gamers new to crypto and NFTs.